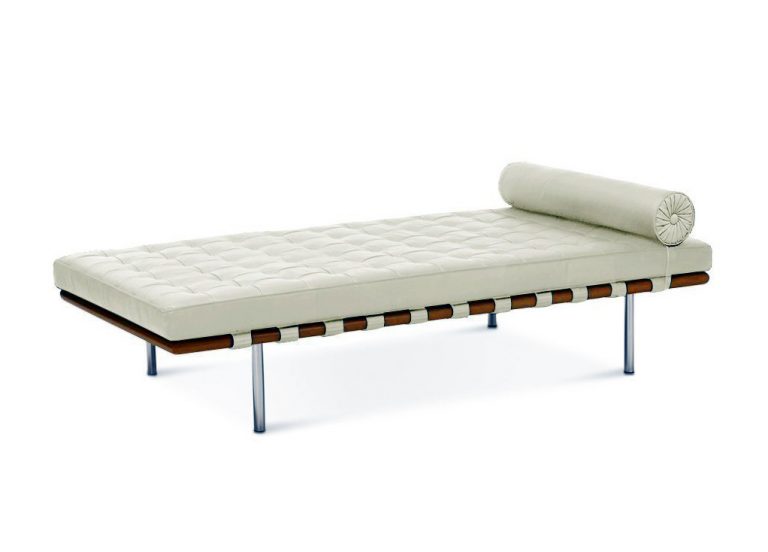 If you are in search of a couch or daybed to bring Mid Century Modern charm to your home or office, you might consider a replica of the Barcelona daybed.

This beautiful furnishing is a study in understated elegance. It draws the eye, but adds no visual clutter to a room, keeping the focus as much on its surroundings as on itself.

In this guide, we will help you find a high-quality Barcelona daybed replica. But first, let’s talk a bit more about the history and design of this iconic couch.

The Barcelona Daybed Is Another Masterpiece by Mies van der Rohe

Ludwig Mies van der Rohe, one of the most famous architects of the mid century period, designed the Barcelona couch.

If it looks familiar to you, that is either because you have spotted it on Mad Men, or because you are familiar with the Barcelona chair, another piece in this iconic series.

The daybed, however, did not come into existence until architect Philip Johnson commissioned Mies van der Rohe in 1930 to work on the interior of his apartment in New York City.

Johnson was happy with the outcome, but the public did not really take notice, possibly because at the time, Johnson was not all that well-known himself.

Johnson’s 1949 Glass House in New Canaan, Connecticut, however, became very well-known. The interior included the Barcelona daybed along with other furnishings in the Barcelona series. At that point, the couch took off.

Originally, it was not easy to get a hold of one of these German-crafted couches. But Knoll became the official manufacturer for Barcelona daybeds in 1964, and was able to speed up production while maintaining the superb quality of the earlier couches.

Indeed, according to MoMA collection specialist Paul Galloway, “The Knoll ones are actually better made.”

It is also worth noting that Mies van der Rohe did not actually give the daybed its name, “Barcelona.” Knoll did that in 1987. It is also helpful to know that the official name of the product is the “Barcelona Couch,” but a lot of people still call it the “Barcelona daybed.”

Features, Materials and Appearance of the Barcelona Sofa

Now that you know a bit about the history of the Barcelona daybed, let’s discuss its overall appearance, features, materials and construction.

The official Knoll version of the daybed essentially takes the form of one flat plane that stands on four slim legs. The legs are stainless steel, and the platform on which the cushion rests is Sapele Mahogany. A lacquer coating protects the wood.

The cushion itself is tufted and welted by hand with 72 individual panels. Underneath the cowhide upholstery is a core of urethane foam with Dacron polyester fiberfill. The cushion is held in place by a set of 17 straps. At one end of the couch, there is a single large bolster pillow that spans the width of the furnishing.

What Does It Cost to Purchase a Barcelona Daybed?

The price you would pay for a Barcelona daybed depends on where you purchase it and who manufactured it.

At the time of this writing, if you wanted to buy a Barcelona Couch directly from Knoll, you would pay more than $11,700.

Don’t have that kind of money to shell out?

Me either. Not a lot of people do….

Thankfully, there are less expensive ways to bring the Barcelona daybed into your life.

You can purchase a high-quality replica of the Barcelona couch for a lot less money than that. In fact, you should be able to bring one home for $2,000-$3,000.

What to Look For in a Barcelona Couch Reproduction

What makes for a high-quality replica? Here is what you should look for:

After searching high and low and comparing the products we found, our recommendation for the highest quality Barcelona daybed replica is the Pavilion Couch by Eternity Modern.

This product meets the criteria we listed above. What else do we love about it?

We have always had a great experience with Eternity Modern.

The quality of their craftsmanship is top-of-the-line, they back their products with a 1-year warranty, and shipping is free for purchases above $1,000. The site also offers returns within 14 days.

Are you ready to furnish your home or office with a timeless classic that is at once minimalist and sumptuous? Click the link below to get the Eternity Modern faithful replica of the Barcelona daybed.

Type to search or hit ESC to close
See all results