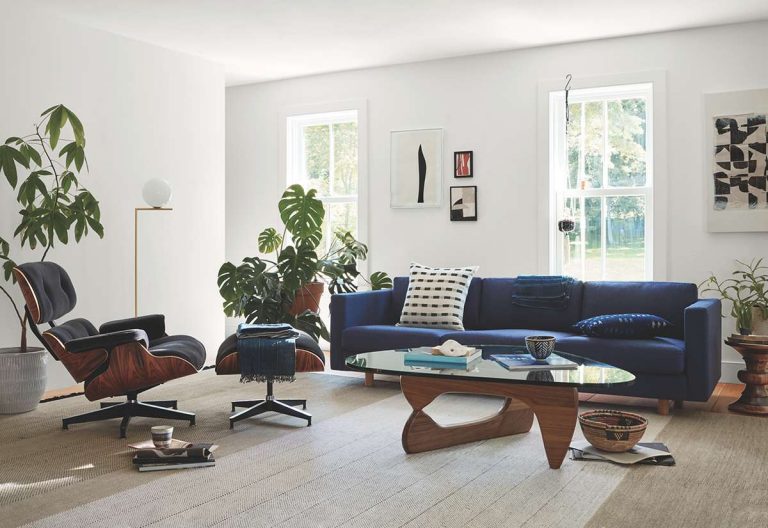 The Noguchi Table is an iconic coffee table that remains in production over 70 years after it was first released to the public. The table’s beautiful flow, sculptor design and high-end materials catch the eye of buyers.

But the story of how the Noguchi Table came about is inspiring and shows what it really means to be a designer.

If Noguchi hadn’t gone through one of the darkest periods of his life and wasn’t turned away or robbed by a major design firm, we may not have this iconic table still being produced 70 years later. Every design has its own story, but very few stories are as inspiring as the Noguchi coffee table.

History of the Noguchi Coffee Table

The Noguchi Table is named after its designer: Isamu Noguchi. The table was first produced and sold by Herman Miller in 1947 right after WWII ended. The table has remained one of the best-selling coffee tables for over seven decades.

Noguchi designed the table to be:

Before Isamu Noguchi became a well-known figure among consumers, he met with T.H. Robsjohn-Gibbings early in his career. He was asked to design a table, so he created a plastic model of the table and left it for the team to view.

He believed that the design would either be rejected or lead to a commission that had the potential to jumpstart his career.

Instead, this was before the Second World War, he had to put his career on hold while he “went West.” What he didn’t tell anyone at the time was that he was being sent to an internment camp during World War II.

Japanese-Americans at the time were treated badly, and Noguchi was no different. When he exited the camp, he found that many of the models that he designed were destroyed.

People didn’t want to associate themselves with the Japanese.

Not only was he imprisoned for no crime, but he also felt that the industry was trying to “erase” him and his works. It was a very dark time for Noguchi. When he was finally released and able to try to salvage his life, he found his table in an advertisement for Robsjohn-Gibbings.

The company never declined his work, but they also never commissioned him or paid him for his design.

Infuriated, he decided to confront the firm. Instead of honoring his work, he was told that anyone could “design a three-legged chair.” What happened next is history. Noguchi decided that it was time to take control of his own fate.

He would use this trying time in his life to design the famous Noguchi Table.

The original table was made with found materials. His original prototype included a slab of glass he found and sculpted pieces of wood. He used the table as his own piece of fine art, creating the table with fine lines and aesthetics that made it as functional as it is beautiful.

Herman Miller forged a friendship with Noguchi, and this collaboration is still ongoing today with the Noguchi Foundation.

George Nelson, a leading designer for the company was inspired by the world that Noguchi had done. He went to Noguchi’s studio and that’s when he came across the Noguchi coffee table. Nelson wrote a groundbreaking article at the time around the table that was aptly called “How to Build a Table.”

This article led to the career of Noguchi and the partnership with Herman Miller.

Herman Miller remains the only official manufacturer of the Noguchi table, although there are a few design companies that create replicas. The replicas can be high-end, but a lot of them skimp out on the high-quality materials to help lower the cost of the table.

The Noguchi Table is designed to be like a fine piece of art, with a sculpture design. Many enthusiasts state that the table has a design of a placid lake and a canoe cutting across the water.

As a self-contained system, the table’s legs are self-balancing, while the glass top provides an open, airy feeling to the room.

The glass is designed to be a reflection of itself. The table is meant to be a sculpture that is much like a poem or a haiku of sorts.

The Noguchi coffee table features a 3/4-inch thick glass top and interlocking solid wood legs that are study and beautiful.

As a functional sculpture, the table is freeform, with the glass plate resting on two solid wood legs that form a tripod for self-stabilization.

You can tell that this is an authentic table when you look for the Isamu Noguchi signature, which is on the edge of the top of the table and another signature can also be found on the underside of the base on a medallion. The signature on the medallion are simply the initials IN, which are stamped on the base.

Herman Miller remains the industry leader in furniture because they maintain the highest standards possible with their tables. The company is committed to manufacturing some of the world’s most celebrated furniture pieces, including items from George Nelson, Charles and Ray Eames, and of course, the iconic Isamu Noguchi and his world famous table.

What If I Can’t Afford the Noguchi Table?

Unfortunately, the table is out of reach for many would-be buyers. The next best thing is a high-end replica.

While we still recommend the high-end models from SmartFurniture.com, Modway does have good replicas.

The “Triangle Coffee Table” comes in a walnut color and weighs 99 pounds. The table is made of hardwood and has a solid wood base. The surface is made of ¾-inch tempered glass.

While not quite the original, Modway offers the best Noguchi table replica. The perfect balance between sculpture and function is met with elegance as the table can sit in a high-end office or be the centerpiece of your living room.

The table is made of solid wood that has been stained with a walnut finish to provide a rich look that is close to the original.

Type to search or hit ESC to close
See all results